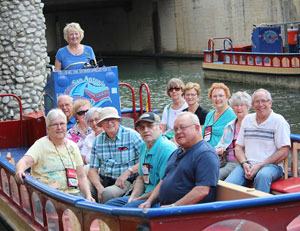 Diana began touring with Edgerton in March of 2016, and joined as a well-seasoned traveler. “I have been drawn to traveling for as long as I can remember. Also, I have always been in the customer service area of the jobs that I worked before coming to the travel industry. It was just a natural path to becoming a tour manager, so I could combine both my love of travel and my love of working with people.”

Prior to retiring from her 36 year employment with the United States Postal Service, she attended International Tour Management Institute in San Francisco because she knew she did not want to just retire entirely. In 2014, she retired from USPS and immediately began working for the American Queen Steamboat Company, running the shore excursions on the paddleboats on the Mississippi and Columbia Rivers, as well as on the Ohio and Cumberland Rivers. From there, she started managing bus tours and train tours across the United States so that she could experience new places.

Her favorite kinds of trips to manage are the motorcoach tours. “I love researching each new place I go to. I love meeting new people and making new friends on each trip. I love showing the travelers all the new sights and experiences.”

Diana has traveled across much of the United States and Canada, and had cruised numerous times to the Caribbean and Hawaii. Her favorite places to visit are Hawaii and Colorado, and she has been to both many times.

“Travel is the only thing you can buy that makes you richer.” 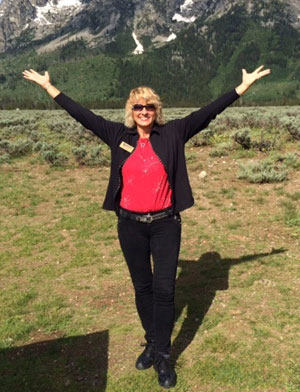 Kim Brothers may be fairly new to Edgerton Travel (starting as a tour manager in 2014), but she certainly isn’t new to experiencing travel. Kim has traveled to 45 U.S. states (including Alaska and Hawaii), Paris, Aruba, many of the Caribbean islands, Puerto Rico, Mexico, Canada, Hong Kong, Japan and the Philippines. Her favorite trip so far has been on the Edgerton Travel National Parks tour out west, with “beautiful rivers, lakes, streams and waterfalls - a variety of land and wildlife.”

Kim received her Bachelor’s degree in Business Management, Marketing and Advertising from Indiana University/South Bend. She also maintains a substitute teaching certificate for Indiana and Florida (where she resides part of the year).

Kim has been an independent sales director with Mary Kay and a catering specialist with The Skillet. She has been certified in biblical counseling, as well as a water aerobics instructor. So, why a tour manager? “Because I love to travel and meet new people.” 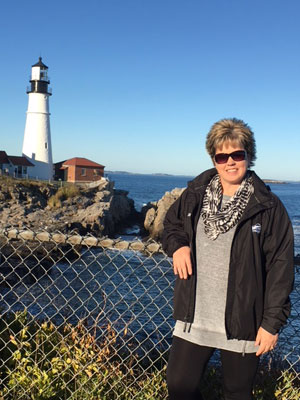 Amy has been a tour manager since 2014. She is a former teacher of 20 years and started doing summer tours her last few years of teaching. She now works full time for Legacy Travel Group and Edgerton Travel in the Iowa office, and loves every minute of it---especially when she is on the road touring! Amy has her bachelor’s degree in Elementary Education, and loves studying the history of the places she travels and sharing it with her clients.

Amy primarily works in the motor coach travel area and enjoys that the most because it gives her more time to get to know her fellow travelers and see so many beautiful things along the way. She says, “Each time I travel, I have 40 new friends! It is especially exciting when I get to see them again on another tour!”

Amy finds herself drawn to the tours on the east coast. She does several trips to Gettysburg and Washington, D.C. each year with both middle school students and adult travelers. She also enjoys the New England area of Vermont, New Hampshire, Massachusetts, and Maine! If she travels west, her favorite areas to be would be some of the National Parks, Mount Rushmore, and New Mexico. Her bucket list for travel includes another trip to Hawaii, New Orleans, and a cruise to Alaska one day.

“Traveling—it leaves you speechless, but then it turns you into a storyteller” - Ibn Battuta 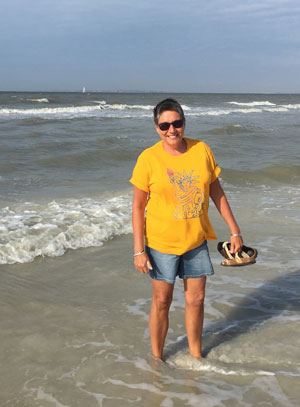 Gina began managing tours with Legacy in June of 2015, just 8 days after retiring from 37 years of teaching. She now manages tours for Legacy and Edgerton out of the Iowa office. Having graduated with a BA from the University of Northern Iowa and later an MA from Iowa State University, she spent all of her teaching career as a history geek. She spent the last part of her career teaching history to middle schoolers, and in 2008 she was awarded the Gilder-Lehrman History Teacher of the Year award for Iowa.

Gina grew up traveling. Due to her father’s job, they took a one week vacation somewhere in Iowa every June and a 2-3 week vacation somewhere in the U.S. each August. Gina has also traveled the U.S. with her own family and with a group of teaching colleagues every summer for the last 25 years. She has traveled extensively in the US and to Puerto Rico, Mexico, and cruised the Panama Canal area and the eastern Caribbean. Iceland remains on her bucket list, along with Hawaii.

Gina says that being a tour manager wasn’t on her radar until Legacy came in and tried to get her to take her school on their tours. When that didn’t work out, they asked if she might like to guide when she retired. When retirement time came, she pursued the job and was fortunate enough to have found her second career.  It combines all the things she loved about teaching: the research, the contact, and the sharing of knowledge with her love of travel.

Gina says she loves the adventure and the learning that each new trip brings. She loves the researching of places she will be guiding and the social aspect of being a tour manager.

“Don’t cry because it is over, smile because it happened.” – Dr. Seuss 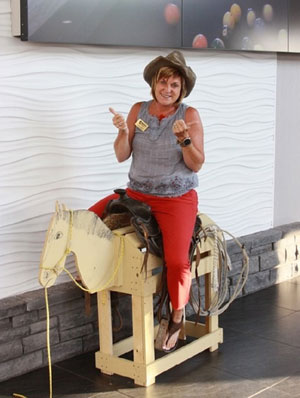 Jacci started as a tour manager with Edgerton Travel in June 2007.  She is a graduate of both Penn High School and Bethel College in Mishawaka. Jacci brings with her a background in teaching Pre-K and nursing.

Prior to becoming a tour manager, Jacci oversaw her husband’s Bethel basketball teams to numerous countries and led many mission trips. She says, “I was well traveled. I loved leading, being organized, prepared, and I love people!”

Jacci has traveled all fifty U.S. states.  Abroad, she’s been to Jamaica, Italy, Ireland, Scotland, the Dominican Republic, Ecuador, Haiti and Brazil.  Her favorite place to travel has been Ireland! Jacci says, “It’s truly the most beautiful place I have ever visited. From a tour manager’s standpoint - they are always on time and have amazing food, countryside, pubs, villages, and flowers!”
Her favorite modes of travel are flying and cruising, and her favorite kinds of trips to manage are the overseas tours, historical trips, and cruise destinations and excursions.

Jacci has a wealth of knowledge and love for travel. She enjoys problem solving and the opportunity to experience travel with clients. And while she usually likes to stick to the plan, she also welcomes spontaneity.  “I love travel and seeing new things through others’ eyes. I love adventure. Most of all, I love making people happy.”

“For the sake of your soul, venture out.”  -Lola Akinmade Akerstrom

“So much of who we are is where we have been.” – William Langewiesche

“Travel is never a matter of money, but of courage.” – T.S. Elliot 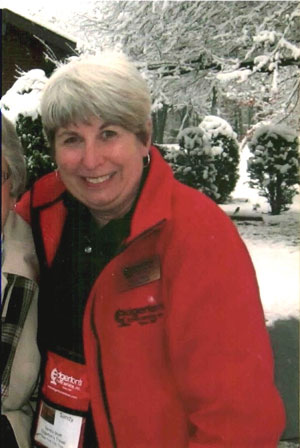 Sandy began managing tours with Edgerton Travel in October 2010. She graduated with a BA from Huntington University and with two MA’s from Indiana University. She previously was employed at many local school corporations as a teacher and administrator.

After contemplating what she wanted to do after leaving the field of education, Sandy thought about all the trips she had taken with students over the years; this ignited the passion she remembered having for planning travel and helping people. She had met many tour managers through her student travel who made it a part-time career, and felt confident it would be a good fit for her.

Sandy says she loves all different mode of travel for different reasons and loves all trips she takes. “It’s difficult to pick a favorite place; I usually just tell people my favorite trip is the most recent one I’ve been on!” Her favorite part of being a tour manager is meeting new people, making new friends, and helping others on the trip also make those connections. It makes her happiest when travelers she has toured with keep showing up on more and more of her tours, and she is able to get to know them. She says “It’s like seeing a long-time friend, you just pick up right where you left off!”

"Travel is more than the seeing of sights, it is a change that goes on, deep and permanent, in the ideas of living."

“Travel is the only thing you buy that makes you richer.” 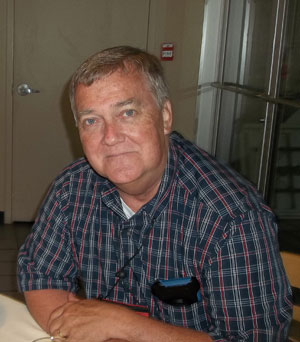 Don has been a tour manager with Legacy since January 2015, and operates Legacy and Edgerton tours out of the Iowa office. Don graduated with a bachelor’s degree in Business Administration and Political Science from Luther College in Decorah, Iowa.

Don has previous experience in working with non-profit organizations and fund-raising and economic development. He also has served as city councilmember for 14 years and mayor for 6 years. He decided to be a tour manager so that he has the opportunity to share travel experiences with others and to assist the travelers to have the greatest experience possible.
Don has traveled to 46 U. S. states, Canada, Mexico, Russia, and Iceland. His favorite mode of travel is river boat cruising, and favorite places to visit have been New York City, Philadelphia, and Washington D.C.

He dreams of one day going to both Alaska and Germany to research his family tree and try to make some connections. Don says, “My favorite part of being a tour manager is seeing the excitement and joy of travelers as we travel to a new destination.”

“It’s a big world out there; it would be a shame not to experience it.”

There is More to Hungary Than Just Budapest

Take a First-Hand Preview Tour of the “Norwegian Bliss”

We have dealt with Edgerton Travel now for many years. This year I asked Christie Jordan here in Ft Wayne to set up dates, Hotel & Air for 8 days in Seattle. She put us in the Hyatt at the Space Needle & it was excellent! We were able to take in the whole Space Needle Park. Chihuly Glass Garden. A day trip to Mt. Ranier. Christie did an awesome job on this trip for us, so we also Booked a Broadway play in NYC for late Oct. We will be staying Right at Times Square. Christie has been & will be our go to person for many future trips. She is prof. & prompt at follow up!!