Havana Cuba, a Norwegian Cruise that did not disappoint 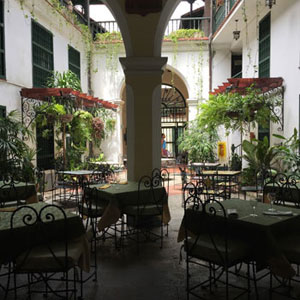 Cuba’s siren song is the stuff of urgent curiosity: “to see it before it all changes.” That was our common purpose. We were ten adventurous baby boomers, all old enough to remember the Cuban Missile Crisis. And when the Norwegian Cruise Line’s (NCL) Norwegian Sky sailed into Havana harbor, we were eyes wide open and anxious to engage ourselves in why we came.

Havana and its people did not disappoint. For two days we roamed among old cars and fine cigars, eclectic architecture and abundant music, and best of all – a warm and welcoming culture.  We were conveniently docked across the street from the section of Havana known as “Old Town.” Its historic center was marked by diverse architecture, museums, narrow streets, and the occasional park and plaza. A guided walking tour of its highlights and charms included a lunch of typical Cuban fare and a mojito at La Bodeguita Del Medio, a favorite venue of Ernest Hemingway. A second tour by bus, dubbed “The Ultimate Havana Experience” gave us a peek at larger Havana, a sprawling city of two million people. 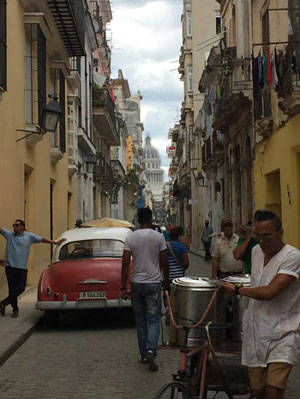 The tours were arranged through NCL, by internet, or directly with Cuban providers by our travel agent. Our guides were college-educated Cubans, with excellent English language skills, who spoke candidly of life in Cuba.

About those old American-made cars: Of course we knew they were there, but we didn’t realize that they were everywhere. It was a baby-boomer’s delight to stand along-side a row of fifty gleaming cars of their youth. Fords, Chevys, Buicks, and Oldsmobiles- they serve as the taxis of Havana: “Which would you like to take?” the taxi matron asked.

One evening we took a 1959 Chevy Impala convertible to a restaurant called Los Nardos in central Havana, directly across the nation’s capital. Fine table settings and flowers marked the setting, and the room was filled with nicely dressed Cubans, some young and some clearly in the counting stage. The haunting sounds of Ave Maria swept through the room and we suddenly realized that three opera-style singers were in play. Tip them as we did and magically they decided to sing a song of romance at our table. All the while we enjoyed a fine meal of local food and drink, entrees running about eight to ten dollars. Like the cars, music was constant. At a weekday lunch, at a bar in the afternoon, or strolling through the streets at night, we always encountered musician and spontaneous dancing – everyone was so happy.

While the menu prices were inexpensive, the cigars were not. Cuban cigars are internationally renowned and lead the market. Its government knows what it has; it regulates the price of all Cuban cigars and while a black market may exist, the authenticity of those cigars may be questionable. 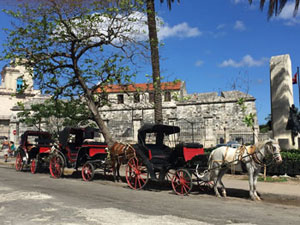 Our group traveled under the umbrella of the nebulous “people to people” education travel approved by the Obama Administration. Purely touristic pursuits inspired solely for the purpose of sipping mojitos and smoking cigars on the beach were not intended. Political and economic policies aside, the concept of “people to people” plays out so naturally. When a Cuban server tracks you down to return the backpack you left behind, looks you in the eye, and hands it to you – goodwill is born. When a Cuban street rascal approaches and pats you on the stomach and says “beer belly”, laughter breaks down barriers. Then there was that night at Los Nardos: Our server was a 60-something fellow with whom we had laughed and engaged personally during the evening. Maybe it was the mojitos and wine that prompted us near the end to playfully ask: “You weren’t really going to fire those missiles at us, were you?”

He just smiled and laughed. All of this is the unvarnished people-to-people travel. They are our neighbors. Go for it! The Cubans are waiting to dance.